It seems as if every lower extremity overuse ailment is associated to some degree with valgus collapse. ACL tears? Check. Patellofemoral Pain? Check. Illiotibial band pain? Check. Tibial Stress Fractures? Check. As a result, a number of research studies have begun to examine what exactly valgus collapse is and what factors are associated with valgus. One of the primary researchers in this area is John Willson, PT, PhD in the Department of Physical Therapy at the University of Wisconsin at LaCrosse. Research conducted by Dr. Willson has led us to a better understanding of this pathological movement. 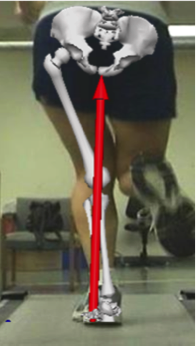 An initial study in this area by Willson and colleagues correlated the two-dimensional frontal plane projection angle to three-dimensional data of the lower extremity during a single leg squat in 40 runners half of whom had patellofemoral pain. The researchers observed that the strongest correlates of the frontal plane projection angle were the frontal plane motion at the hip and transverse plane motion at the knee (external rotation) and hip (internal rotation). Not surprisingly, there was not a significant relationship for the frontal plane angle at the knee. Additional analysis of the significant relationships revealed that the primary factors associated with the valgus collapse posture were contralateral pelvic drop, femoral adduction and femoral internal rotation.  While I imagine this result does not surprise anyone it provides support and directions for areas with which to intervene when aiming to alter valgus collapse.

As a result of this study, we now have a better idea of what is associated with valgus collapse. Now the follow up question is what needs to change to reduce valgus collapse? Is it

just a strength issue, is it a muscle activity issue, is it a proprioceptive issue? Well, in all likelihood it depends on the individual who needs the training and it is important to systematically screen out all of these issues.  That being said through controlled research studies we can begin to understand what are the primary factors associated with this pattern. Examining the factors associated with valgus collapse will be highlighted in the 2nd part of this series before we begin to take a look at some motion analysis case studies in this area as well.