What is Evidence-Based Practice and Why Is It Important?

Although it’s roots can be traced back earlier in history,[1] Evidence-Based Medicine (EBM) was first introduced by Dr. Gordon Guyatt of McMaster University in Canada to the publishing world when it appeared in the Journal of the American Medical Association in 1992.[2] In the subsequent years numerous publications were released that better defined what EBM (or “EBP” for “Evidence-Based Practice”) was all about, including a seminal article by Sackett et al in 1996.[3]

One of the most common misconceptions about EBP is that it is strictly about research. However, there are 3 major components, each of equal importance, that formulate this concept: 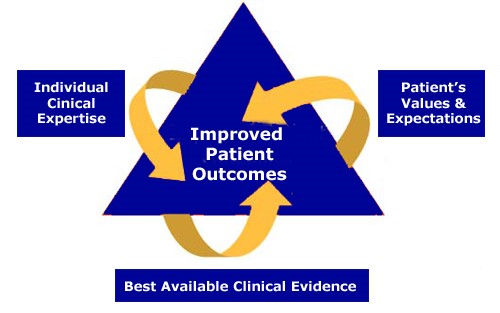 The diagrams show that “best research evidence” is one of the major players of EBP, the other two being clinical expertise and patient values (also reported as “preferences” or “expectations”). It is the combination of these 3 elements that leads to the ultimate goal of improved patient/client outcomes. A problem many fitness and healthcare professionals continue to have is to rely exclusively on their expertise in the field, and not take into account patient/client preferences and the most up-to-date research.

Too often, clinical or program planning decisions are based more on tradition than solid science. For example, many strength and conditioning and rehabilitation professionals have traditionally recommended rest, ice, compression and elevation (RICE) following an acute ankle sprain, but the evidence is inconclusive about the relative effectiveness of RICE.[4] In fact, an editorial suggested that new guidelines incorporate “POLICE” (P = “Protection” and OL = “Optimal Loading”) to pave the way for more research on this subject.[5]

There are many forms of research that fitness and rehabilitation professionals need to understand to make informed decisions about client/patient care. Presently the highest forms of evidence for making such decisions come from clinical guidelines or systematic reviews based on randomized controlled trials (RCTs). The word “controlled” refers to the need to control for bias. All professionals are subject to applying bias in their day to day work. For example, if you just attended a course on a new strengthening or treatment technique, there is a good chance you will be biased toward applying this newly acquired information on many clients/patients, even though that technique may not be appropriate in some cases.

While the data is mixed on sensitivity and specificity statistics of the Functional Movement Screen,7 it must be reiterated that the Functional Movement Screen was never meant to be an injury prediction tool in and of itself, but an adjunct to a battery of other tests used for assessing injury risk. In fact, the recent study by Teyhen et al [8] showed high sensitivity (0.90) and high specificity (0.98) when taking into account several risk factors for musculoskeletal injury. Such research combining multiple risk factors can help health and fitness professionals make better decisions for those who may (or may not) be at greater risk of suffering a musculoskeletal injury. Please refer to the detailed research review by Phil Plisky for more in-depth information.

[4] Van den Bekerom MP et al. What is the evidence for rest, ice, compression, and elevation therapy in the treatment of ankle sprains in adults?