Simplicity and the FMS: Peeling Back the Layers of the Screen 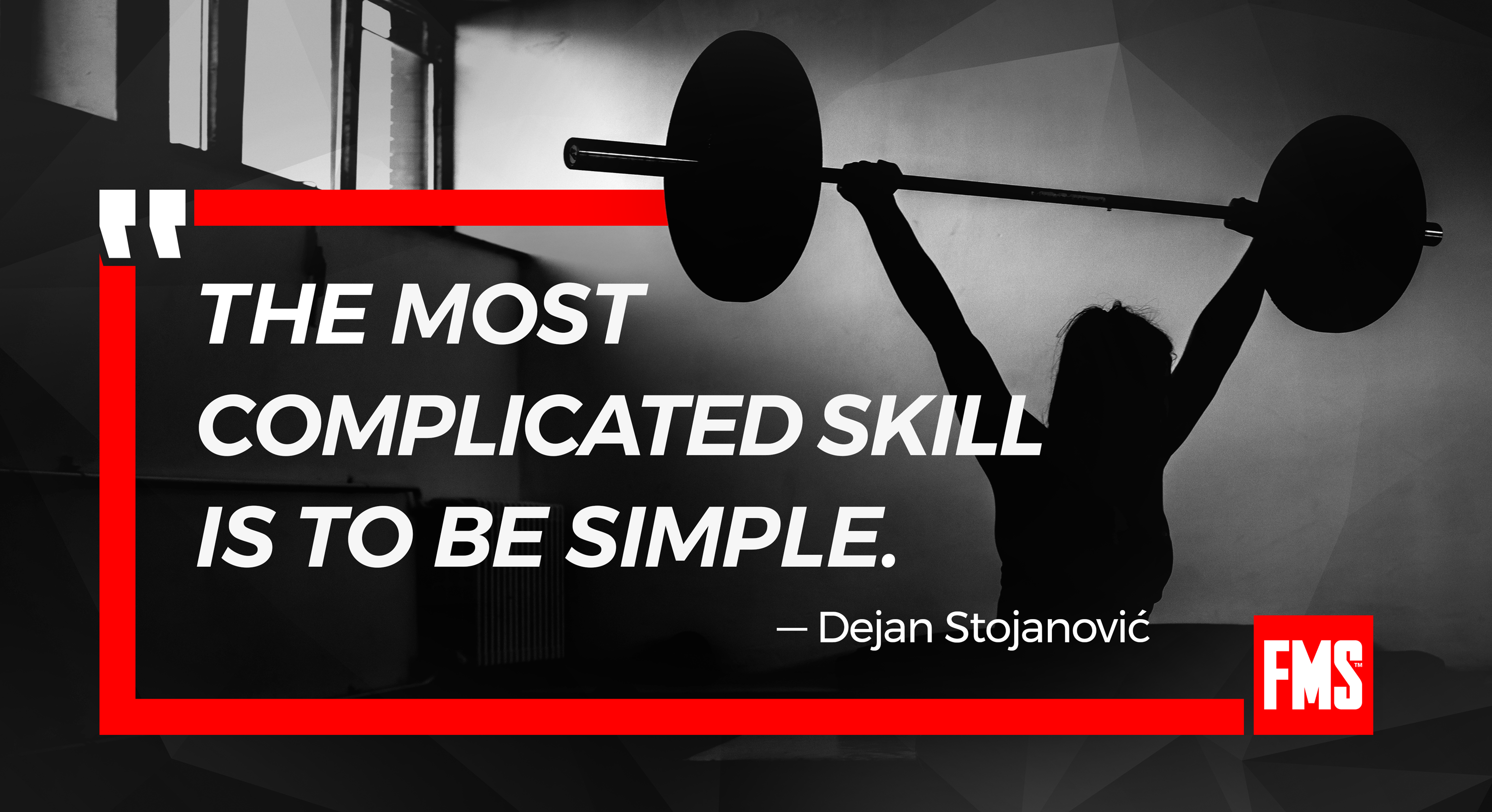 In Part 1 of this article, we discussed the idea of simplicity and the FMS as a system to categorize movement into four "buckets":

In the first article we did not get into the responsibility to know “Why” we place the movement into the correct “bucket.”  In this follow up article, we will try to peel the layers back a bit on the screens themselves.

Now, for the FMS professional running the screen, there is a need for deeper knowledge and understanding of each screen.

In the Level 1 manual and materials there are the Purpose, Description, Verbal Instructions and Scoring Criteria.  The Purpose and Description allow the FMS professional to understand in greater depth what we are looking at and what we are looking for in each screen.  The Verbal Instructions allow the FMS professional to quickly and easily get the person being screened into the set-up positions (which need to be perfect for each rep) and to understand what movement is expected in each screen without coaching them on how to perform the movement.  Then, and only then, do the Scoring Criteria matter.  I will not dive deep into these additional layers since we have a very good online course that covers the details behind running/using the FMS.

Here's a breakdown of what we're looking at in each screen of the FMS:

Functional Patterns (based on foot position): 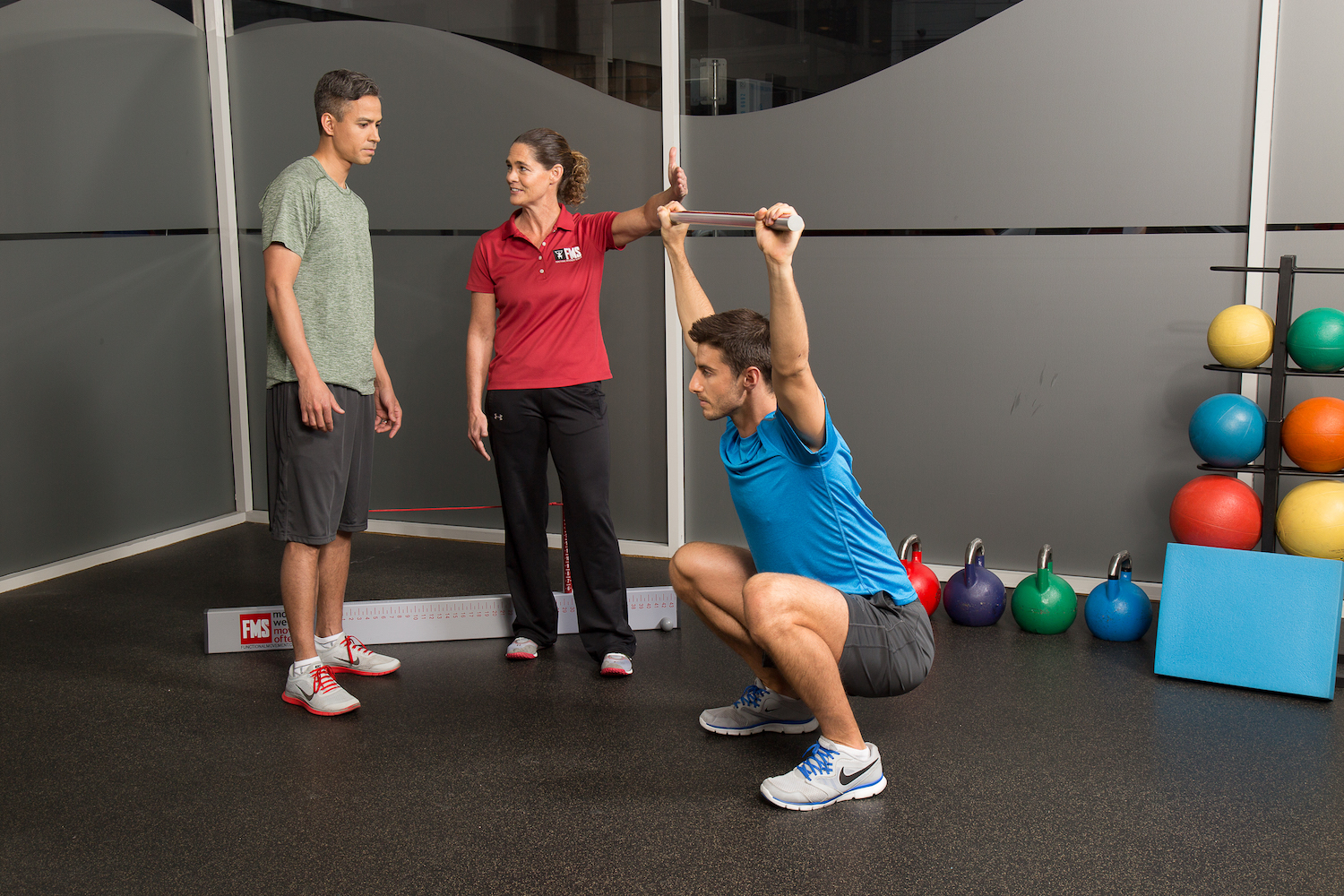 This is a symmetrical stance movement pattern coordinating a full overhead position from the shoulders, the thoracic mobility to support it, with a stable center and full mobility/control of the pelvis, hips, knees and ankles.

There is a lot going on in the Deep Squat and that is why it is last in our corrective strategies.  There are so many “things” that could be impacting the Deep Squat that are much easier to deal with in less complicated patterns.

While the full Deep Squat pattern may not be apparent in daily activities or sports, having access to it allows for a “buffer zone” of available range of motion and control so an individual is not always bumping up against their maximum available range.  Efficient symmetrical stance movement and control are essential for a variety of daily and sporting skills. 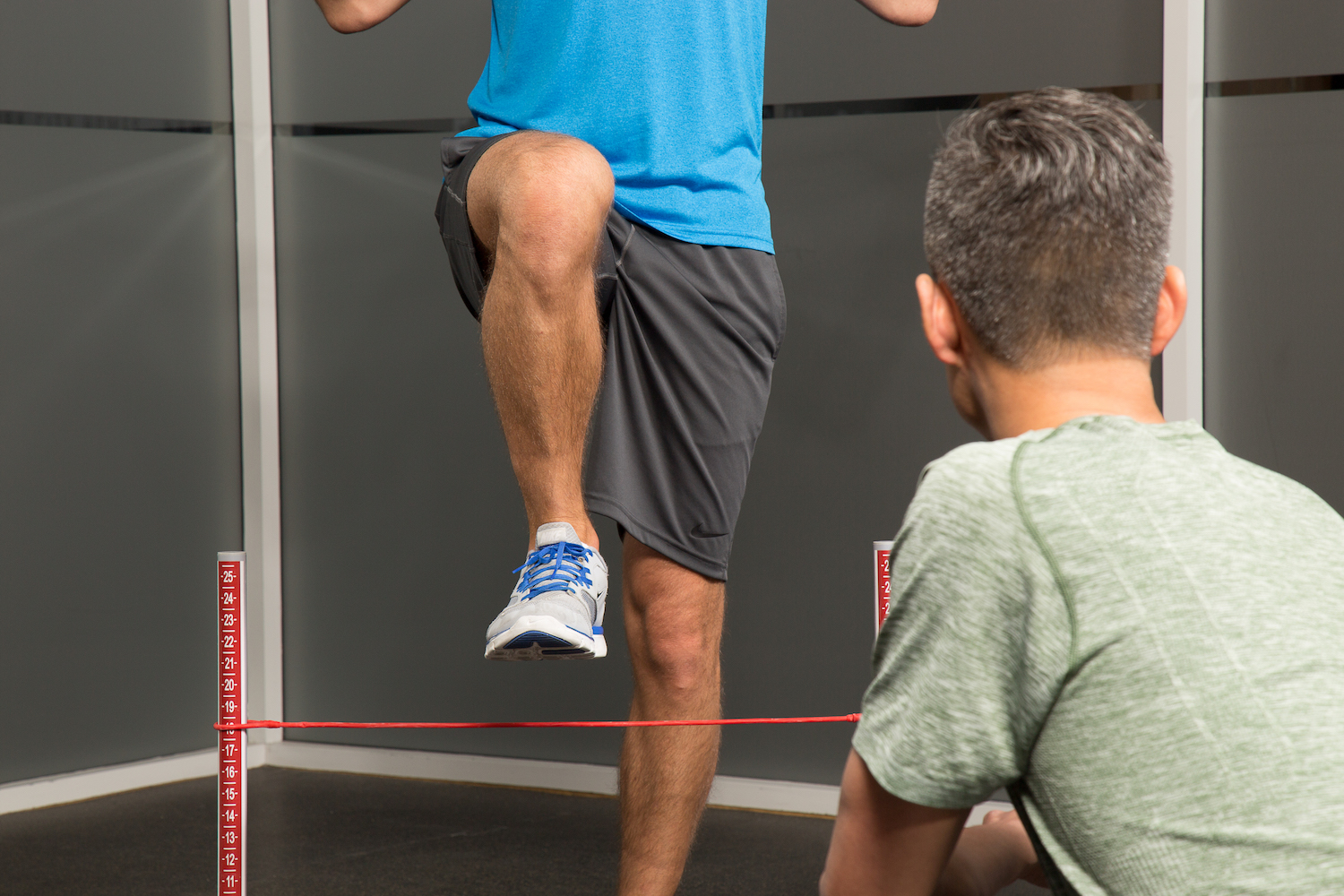 Based on an efficient single leg stance, the Hurdle Step coordinates a controlled flexion of the ankle, knee, and hip with a stepping motion on one leg while maintaining extension and control on the other leg.  The position of the upper body and the dowel provide a horizontal reference that makes mistakes easy to see.  Stepping over the height of the lower leg allows observation of a large range of motion for the stepping leg and a longer time of control on the stabilizing leg.

Single leg stance is essential for locomotion (ie. Walking, running etc…) and the tibial height used is similar to the mechanics of sprinting and acceleration.  Janda looked at single leg stance as one of the best ways to look at “core control” and, athletically, it is not hard to see why single leg stance and the range of motion and control of the Hurdle Step are important parts of the screen. 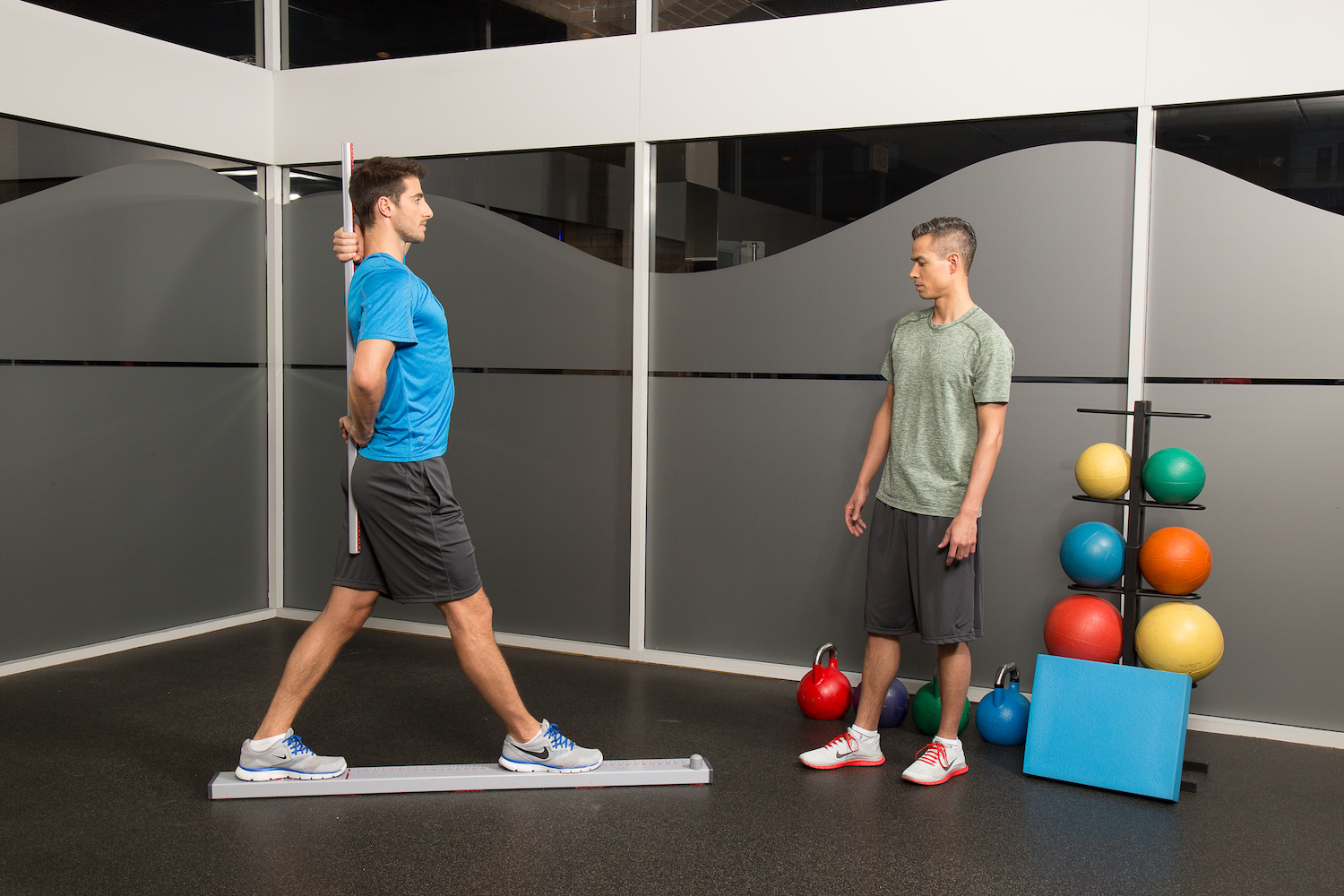 An asymmetrical stance movement pattern that uses a reciprocal arm and leg position to challenge the upper body, while maintaining a stable center and coordinated use and control of the range of motion of the pelvis, hips, knees and ankles.

Seen in walking, running and other athletic activities, the In-Line Lunge covers a lot of different areas.  While the Hurdle Step looks at locomotion, the In-Line Lunge is seen in deceleration and change of direction movements/motions.  This screen places the body in a position to focus on stresses as simulated during rotation, deceleration and lateral movements. The narrow base requires appropriate starting stability and dynamic control of the pelvis and core within an asymmetrical hip position. The reciprocal position of the arms and legs is the natural contralateral movement and control of gait and other activities. 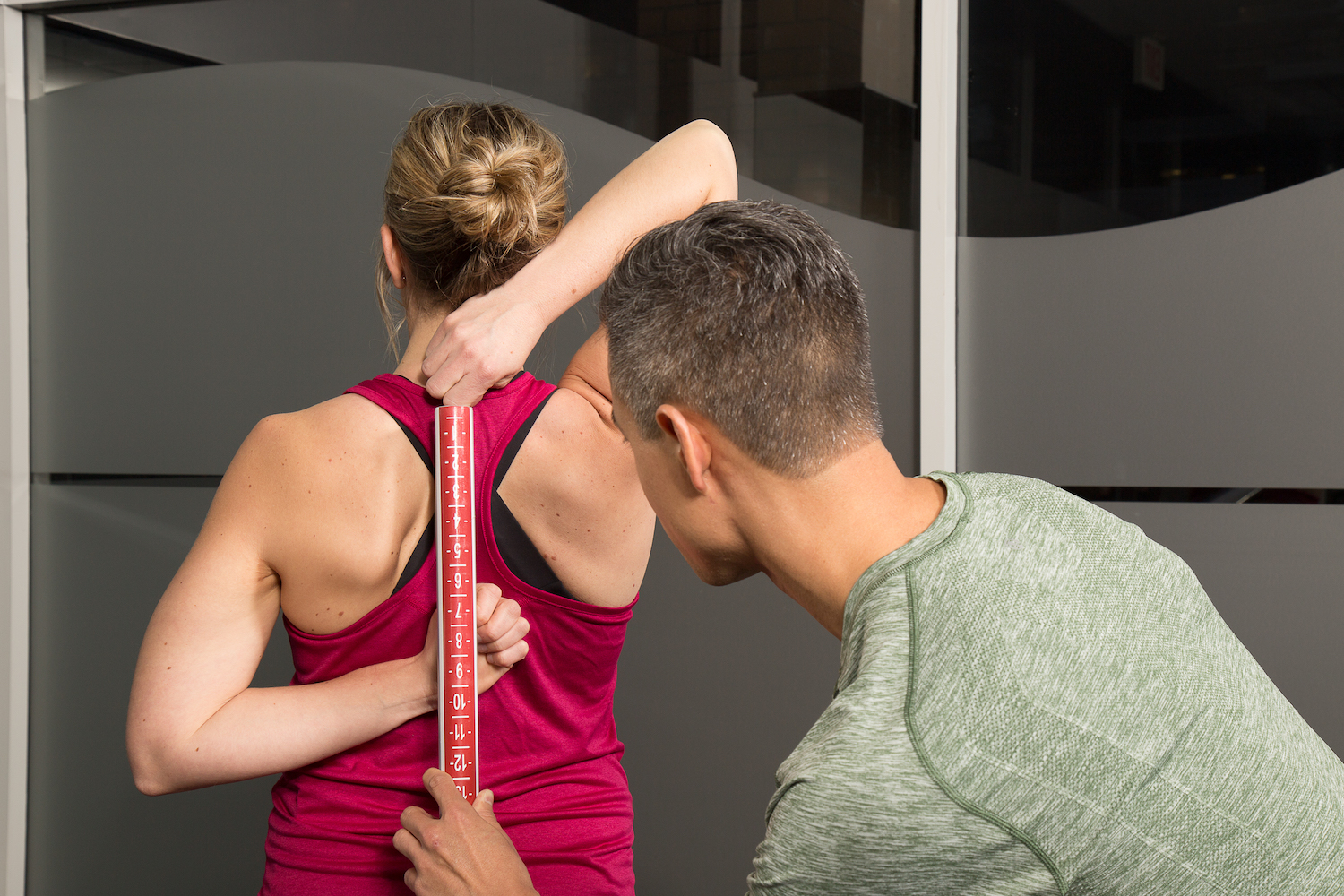 This is not a “shoulder test,” but a pattern screen. 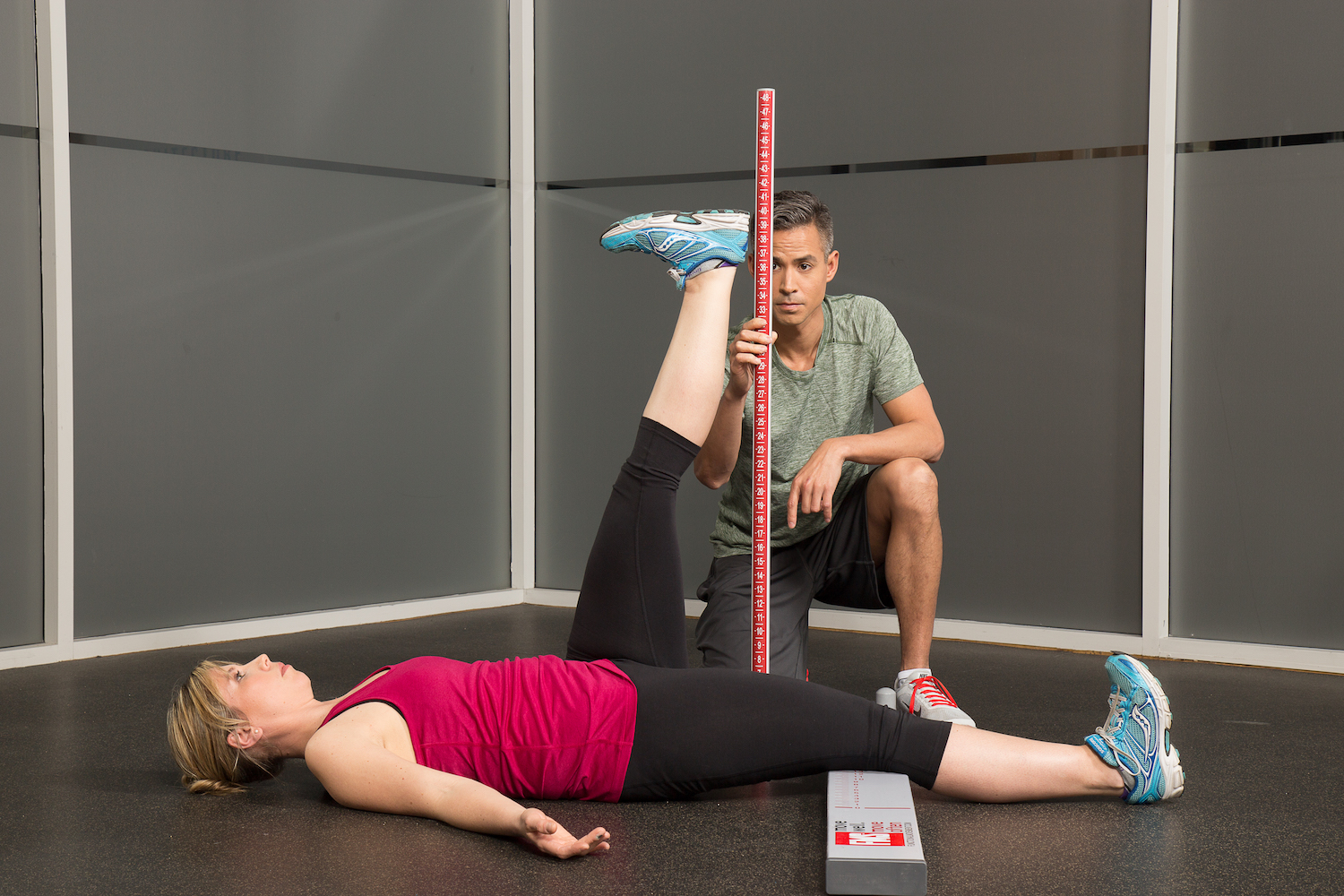 ASLR is the coordinated use of lumbopelvic control while raising one hip/leg into flexion and maintaining extension and control of the down leg.

While the hamstrings are involved, this is not a “hamstring” test.  The ASLR can be influenced by the anterior chain, the posterior chain and/or lumbopelvic control (or even the ankles).  While it is the least “functional” in appearance, the ASLR looks at the essential skill of dissociation between the lower extremities with appropriate lumbopelvic control.  This ability to have controlled dissociation is apparent in many athletic and daily activities and loss of this movement pattern can influence many other areas of the body. 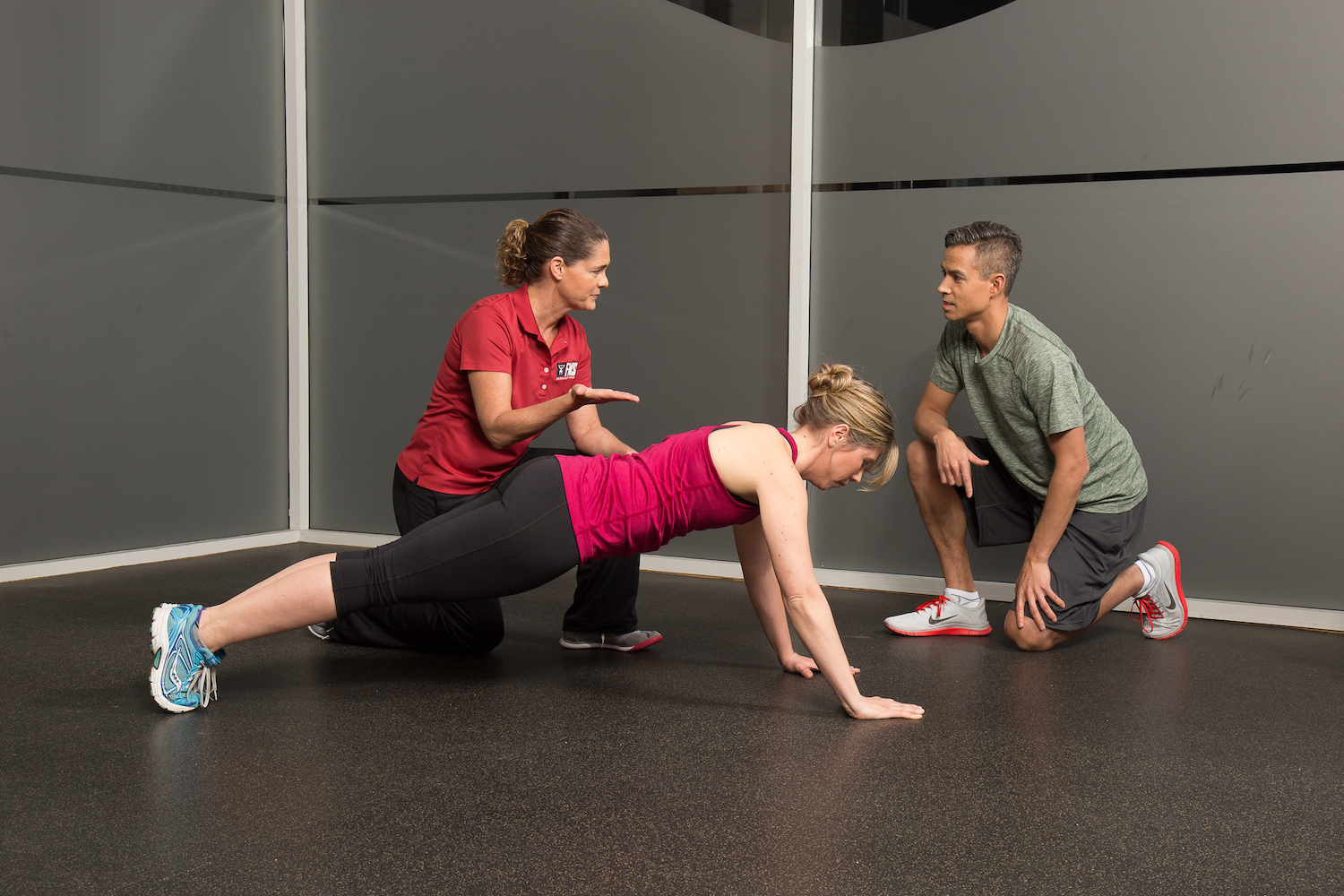 By initiating the push-up from the ground at a “dead start,” the TSPU looks at sagittal plane stability and lumbopelvic control in response to the action of the prime movers.  If the stabilizers do not respond appropriately, the spine and other structures can be loaded inappropriately.  This lumbopelvic control is displayed in many daily and sporting activities, such as deadlifts, kettlebell swings, and any movement where extension of the hips and spine must be controlled. 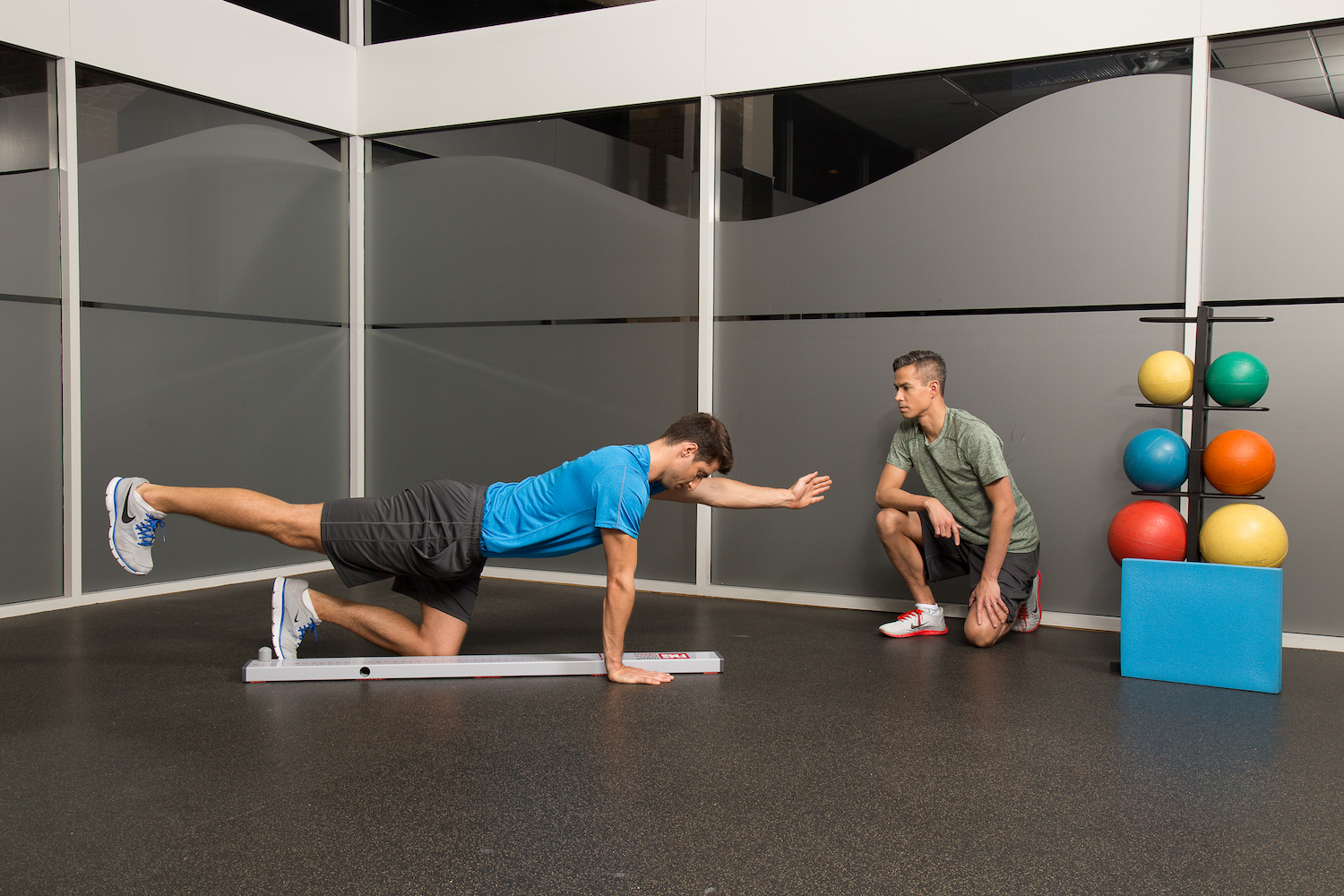 This screen is a unique perturbation/challenge to the subtle motor control system in quadruped with a changing base of support.  Whether ipsilateral or contralateral, can your body respond appropriately to a change in base of support and have control over a few seconds?

This is a subtle stabilization of daily life not the high threshold strategy of the weight room.

With its roots in the creeping/crawling pattern, the RS looks at transverse plane stability/control with the range and control used in patterns like climbing.  During athletic or daily activities, there is rarely the chance to feed-forward our tension and stability but rather a very subtle stabilization must be present to control unwanted motion in various planes.

I would be remiss if I did not mention the three clearing tests in the FMS screen:  Shoulder Clearing, Extension Clearing and the Flexion Clearing are pain provocation tests.  These help as a redundancy in the FMS screen in looking for any painful patterns or areas that may need to be referred to a health care provider for further evaluation.

As discussed in the first article, the scoring system is “by the numbers.” Just give the movement a number and put it in the right category/”bucket.”  But what about the asymmetries?  A difference between the right and left score should not be confused with a difference in right to left measurement.

An individual with an 8” hand can reach upwards of 4” difference in measurement but still have a symmetrical score of 2’s on the Shoulder Mobility screen.  Symmetry of score not symmetry of measure.

And we do not place blame according to score.  An ASLR of 2 on the Right and 1 on Left does not mean we “attack” the left side.  The difference of score does not indicate a “why” but simply means we should look at the ASLR pattern in its entirety as described above.

Also remember that scores of 2 are “good enough”.  Using the FMS as your movement baseline does not mean you are chasing movement “perfection” (whatever that may be), but rather you are setting and clearing a baseline so you can move on to the fun stuff (sports, training etc…).

There is an old saying in the special forces community: “If you have one, you have none. If you have two, you have one,” meaning redundancy and doubling up ensures that nothing gets missed or lost.  Within the FMS screen, there is a purposeful redundancy.  Hip extension is checked in at least three different ways.  The ankle is checked in at least three different ways.  Shoulder Mobility is part of the DS, HS, ILL and the SM screen itself.  You do not need to think through the redundancy because it is built in and the corrective algorithm directs you on where to place your attention.

Coach Mike Boyle has described the FMS as “complicatedly simple.”  And I think that sums it up nicely.  The screen is accessible and simple in many ways but that does not mean that there are not deeper layers under the simplicity. 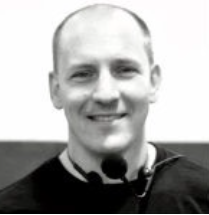 Brett Jones is StrongFirst’s Chief SFG Instructor and an Advisory Board Member with Functional Movement Systems. He is also a Certified Athletic Trainer and Strength and Conditioning Specialist based in Pittsburgh, PA. Mr. Jones holds a Bachelor of Science in Sports Medicine from High Point University, a Master of Science in Rehabilitative Sciences from Clarion University of Pennsylvania, and is a Certified Strength & Conditioning Specialist (CSCS) from the National Strength and Conditioning Association (NSCA).

As an athletic trainer who has transitioned into the fitness industry, Brett has taught kettlebell techniques and principles since 2003. He has taught for Functional Movement Systems (FMS) since 2006, and has created multiple DVDs and manuals with world-renowned physical therapist Gray Cook, including the widely-praised “Secrets of…” series.

Brett continues to evolve his approach to training and teaching, and is passionate about improving the quality of education for the fitness industry. He is available for consultations and distance coaching by e-mailing him at appliedstrength@gmail.com.