We’ve long thought that our approach to looking at movement through the lens of function was valuable and contributed to positive outcomes in the world of fitness, performance, and rehabilitation. Intuitively, it makes sense that the better people move, the better they will continue to move. What’s more, over 60,000 professionals around the world have joined the movement and are using our tools to change the lives of those in their care.

Studies have been inconsistent as to whether the FMS composite score can be used as an isolated predictor of injury.

But we know injury risk is multifactorial and to accurately screen for risk, a multiple factor approach should be utilized.

Even in Drs. Kiesel and Plisky's first research publication on the FMS they said "Based on this retrospective analysis, the authors suggest including the FMS™ score in the model by using the individual test scores in addition to the composite score. With this detailed information, it may be possible to specifically identify factors (previous injury, deep squat score, lunge score) that contribute most to injury risk and then focus injury prevention efforts on modifiable factors such as dysfunctional movement." 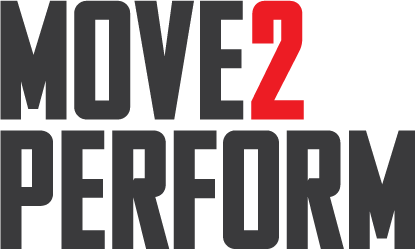 The solution? Move2Perform is our industry-leading, research-backed system proven to accurately identify and categorize injury risk by weighting multiple risk factors. It allows professionals to:

And it does so based on what the research says about injury risk.

Injury Risk Can Be Identified

The first study demonstrating a relationship between injury and Screen score was in 2007.1 There are 5 systematic reviews looking at the Screen total score and injury.4–8 In general, they look at the same studies and come up with conflicting conclusions. One study showed that using just the overall Screen total score was not predictive of injury risk, but evaluating its individual parts was predictive.2 That is, a low score on one test or any pain on any test was predictive of injury. Additionally, one study demonstrated that asymmetries on the Screen relate to injury in NFL players.3 Again, we suggest not using the Screen as a one-off injury prediction tool, because a multifactorial approach is more precise.

The Y Balance Test (YBT) has discriminant validity in those who have had UCL injury, low back pain, and ACL reconstruction.14,15,16

Additionally, two studies have demonstrated the relationship between reduced or asymmetrical dorsiflexion ROM and knee injury.17,18

Beyond athletics, numerous studies use the YBT with the elderly to identify balance deficits, demonstrate the effectiveness of fall reduction interventions, and determine functional recovery after total hip, knee and ankle replacement.19,20,21–23

We analyzed and published data on individual tools such as the Screen and the YBT and demonstrated each tool as an individual risk factor, therefore, they should be included in an injury risk algorithm. The reliability for each portion of the Screen and YBT have been established in numerous studies.5,10,24–31

Injury Risk Can Be Categorized

Injury risk is clearly multifactorial - the more factors you stack on top of each other, the higher the risk for injury. Therefore consideration of multiple risk factors simultaneously is a key component to accurately identifying individuals at greatest risk.

In 2009, we developed the algorithm known as Move2Perform, which weights multiple research-validated risk factors and places each individual in one of 4 risk categories: Optimal, Slight Deficit, Moderate Deficit, and Substantial Deficit.

This M2P approach was first validated by Lehr et al.,32 which was a prospective injury study in college athletes. The study demonstrated that those in the high-risk M2P categories were at a 3.4x increased risk when compared to those in the low-risk categories.

A similar model was used in a large military study in general soldiers and army rangers representative of the general population (Military Power Performance and Prevention Studies (MP3)).33,34  The risk factors identified included pain with movement or clearing tests of the Screen, 3 different components of the YBT Upper and Lower Quarter, and different aspects of a previous injury including severity and self-reported perceived recovery.  Additional factors included ankle dorsiflexion mobility asymmetry and reduced aerobic fitness.

We consider these risk factors as gold standard factors for the general population.

The takeaway? MP3 demonstrated that those with more risk factors are at the greatest risk and that this relationship is linear, validating findings from the Lehr study. Thus, the M2P approach for injury risk is what is recommended at FMS for injury prevention.

Injury Risk Can Be Modified

Four studies have shown that the Screen scores do improve with individual exercise programs.35–38 And, when performance on the YBT is improved, injury risk decreases.39,40

When utilizing the M2P approach, as recommended by FMS, a study by Huebner et al.41 has demonstrated that athletes in the moderate risk category can move to the slight category by simply completing a program of corrective exercises as recommended by the FMS corrective exercise strategy/algorithm. A study by Schwartzkoph-Phifer has shown that when athletes with multiple risk factors receive individualized treatment designed to reduce injury risk, they do improve and injury risk is reduced.42

Move2Perform software is available in the FMS Pro App (version 1.35.0 or later) to active members who have completed both the FMS Level 1 & Y Balance Test certifications. Purchase the Move2Perform Bundle to obtain both certifications.

9. Bunn, P. dos S., dos Santos Bunn, P., Rodrigues, A. I. & da Silva, E. B. The association between the functional movement screen outcome and the incidence of musculoskeletal injuries: A systematic review with meta-analysis. Physical Therapy in Sport vol. 35 146–158 (2019).