Beyond my personal usage, it’s a very frequent statement I hear as a coach and as a physical therapist. It’s often how people refer to a performance that wasn’t up to speed or an injury that was unforeseen.

For a healthy perspective, you could also flip the statement. Maybe you let your body down? Maybe your body has been sending you signals for quite some time that things aren’t right: feeling tired all the time, less than optimal energy, poor flexibility, a problem on one side or pain with simple movements. All of these things are signals; the only way your body really has to communicate with you.

A simple checklist could help you quickly locate the source(s) of your body’s problem with you: 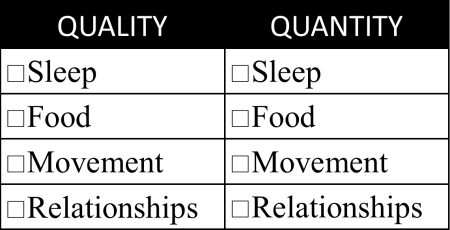 In today’s highly-quantified life, with Fitbits and all kinds of gadgets that will analyze your body’s natural rhythms, frequencies and tendencies, the one thing you’re failing to recognize is a need to be self-aware. You may not be a self-regulating organism. Some of the best athletes of all time just know their body so well they don’t need the Fitbit. Well, you can use a Fitbit (or any similar device) to get to get to that level of self-regulation. 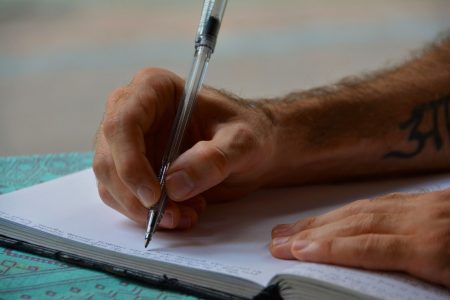 Start deciding to write down if you had a good night’s sleep before you check and see if a device told you that you did. See if you actually had an awesome trail run (by both time and feel) before you look at your optimal heart rate and your recovery. Can you estimate your state of readiness before a new app tells you about your heart rate variability and your current state of readiness?

You don’t need a device to see if you’re letting down your body. If you have pain with simple movements or during exercise and don’t do anything about it, you’re letting your body down. It’s the only way your body has to speak to you in that pattern. You are so self-unaware of poor movement patterns that your body finally had to use its loudest volume to communicate with you.

Regardless of what your device says about your quantity/quality of sleep, if you’re tired when you wake up in the morning, get out of bed and do something for three or four minutes, like a sun salutation or a few simple stretches. Roll around on the ground. After about two to three minutes, you’ll find out you weren’t tired at all. You got plenty of rest. You were just transitioning very poorly. You were missing that window to go ahead and jumpstart your body and send it some signals as it was sending you some signals. Learn to live in harmony with your body. 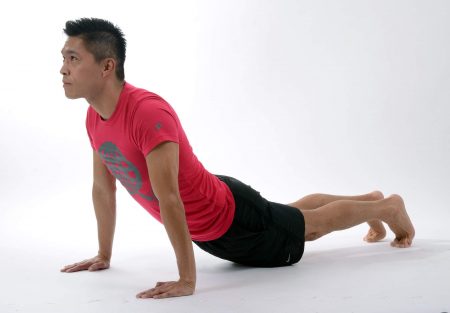 We look at a lot of signals. With Functional Movement Screening and Y-Balance Testing, we can easily see when your body’s function is actually under your expectations for the activities you’re getting ready to go into. Does it mean you’ll have an injury? No. does it mean you’ll have a less than optimal opportunity to become better? Probably.

There is a constantly recurring theme in movement screening and movement testing research: those who compared the most poorly to the majority of most groups also required greater resources to accomplish the same results as the majority.

Ankle mobility is a very, very important factor in the fitness and athletic communities. What’s an indicator you can figure out right now? If you’ve lost your deep squat, the ability to sit deeply, almost butt-on-heels without weight, just in your living room or outside, with or without shoes on, then there could be an ankle mobility problem. So, if you’ve lost your deep squat, that’s the first signal that you are no longer moving as authentically as your forefathers. Or a three-year-old. Secondly, if you have pain with movement that’s not extreme movement (not intense movement, not even loaded movement or extreme movement it’s simply an average movement pattern: touching your toes, lunging on each side, taking a knee and standing back up) that’s your body sending you a signal.

Inability to perform movement patterns and put your body into shapes and postures that are absolutely normal is an indicator that there’s dysfunction. Look at somebody else doing a movement or look at a textbook picture of a movement. Can you reproduce that movement? Can you read and write the language of movement patterns?

If you see a squat, attempt one, and actually perform a hip hinge, then you cannot read and write movement patterns.

If this were English class, I’d question your literacy and your fundamentals. But, if it’s a day at the gym, we suspend logic and just load on some weight, and see how much you can push . . . then post the experience on Facebook.

Listen to the signals your body is sending you. If you’re having a hard time reading those signals, ask for help. The Functional Movement Screen was designed to help start the conversation. Most people think it was designed to finish the conversation. It was not. If your movement screen is normal, it doesn’t mean all things are well. There are lots of other tests we need to do to solidify, say, your performance and your durability. If your movement screen is clear, but you’re having fitness problems, we can then actually screen your fitness and fundamental capacities. If your movement screen is dysfunctional, we can actually put your fitness goals over to the side for a minute, work intensely for about a week on corrective strategy, and see if we actually changed your movement screen. If we did, we could go back and measure that fitness issue that was giving you a problem. If it’s gone, what you thought was a fitness problem was simply a functional problem.

This occurs so often with the participants at our FCS courses that it seems staged. I assure you that it isn’t, but it does demonstrate that we decide on the problem before we measure or baseline all of the potential sources or complicating factors.

Below is a conversation that I had with Mobility WOD's Travis Jewett about the application of FMS in CrossFit.  We touched on many of these themes, including the importance of building capacity and complexity off sound foundation of movement and readiness.

Last, but not least, if you have pain during a movement screen, the movement screen has done its job. It’s not going to tell you too much more about that pain, other than the site where it occurred and the movement pattern that provoked that symptom. From that standpoint, we’ve got a nice safety net. A professional, like a chiropractor, certified athletic trainer, physical therapist or a physician trained in the SFMA can take that same movement pattern language that we use in the movement screen to help engineer your fitness and actually construct a rehabilitation plan that’s based on your movement pattern behaviors, not just look at you like a bag of body parts.

If you want to know how to listen to your body, just start listening to your body. Start listening to the signals I’ve been discussing. Follow some of the guidelines I’ve given you. If you’re having a hard time just getting reintroduced to your body, that’s when sometimes a single session of a movement screen is worth 10 workouts from the exact same professional. A single step in the wrong direction can be easily fixed, but 2,000 steps in that wrong direction will require serious time and energy to correct.

Map makers and geographers will tell you, “The map is not the territory. It’s simply a representation. The territory is much different, much more diverse, and ever-changing. The map is a fixed set of images that simply relates to the territory.” Looking at an anatomy book and pointing out your painful body part, that’s playing with a map. Going through a movement screen, going through corrective strategy, confronting your own inappropriate movement behaviors . . . that’s getting into the territory. That requires you to get your feet a little muddy and your hands a little bit calloused. In the end, you and your body will be talking together. You and your body will be engaging the familiar and the unfamiliar with integrity.  After all, and I've said it before, we are made to grow strong and age gracefully.  Reclamation of authentic movement is the starting point.

Whether you start listening to the signals of your body and using some quantifying assistance to gauge your perception to its measured reality or whether you want to seek out a movement screen professional to just help you find out where your movement literacy is probably good enough to pursue a training goal and where it’s inadequate, you’re probably never going to see that goal unless you learn how to read and write movement patterns first. It doesn’t replace any of the fitness strategies or performance strategies you’ll put on top of that. However, most coaches at the elite levels are far too wise to put unnecessary fitness loads on inappropriate movement patterns. The movement screen was our simple way to tap into this acquired wisdom long before we are as accomplished and wise.

If you believe that perception drives behavior, then embrace the corollary: Self-awareness is the first step towards self-regulation.

If you’ve got 10 minutes, shake hands with your body, because you’re getting ready to start communicating in a completely different way. Start by understanding, start by listening. Maybe you’ve failed your body, and maybe your body didn’t fail you.