Half Kneeling for the Hip and Ankle

Hopefully, you’ve practiced some of the tall kneeling stuff and are ready to progress to half kneeling. In half kneeling, we’re going to bring one knee up.  We’re going to leave the down leg in the exact same position and almost draw a perpendicular line from the mid-shaft of your lower leg through the heel and big toe of the foot in half kneeling.

Watch the video on Half Kneeling Holds 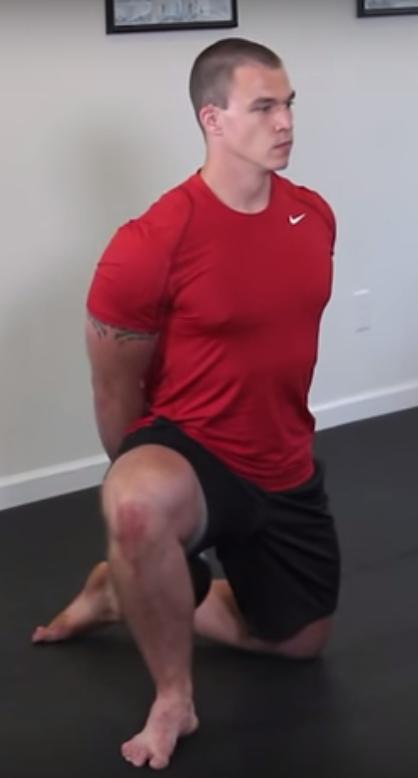 Now in half kneeling, we’re going to hold that kettlebell in front and behind.  In front provides a load that allows you to cheat a little bit of that last few degrees of hip extension but when we go behind . . . oh my goodness.  It’s an entirely different workout.

Dan John referred to it as a kneeling plank because that’s what it feels like for some people.  If it’s a little bit too hard, you need to get on a foam roll and get that anterior chain.  Roll those thighs.  Get loosened up just a little bit and then compare half kneeling before to half kneeling after.

Once again, if you have serious mobility problems, it doesn’t mean that you can’t practice this stuff but do me a favor. You will only make a gain here if you gain mobility before you go into this. By the way, you don’t have to use that mobility in the exercise to benefit from it.

That is one of the greatest misconceptions in Functional Movement Screening. Most people have enough ankle motion to get into a fairly deep squat. However, none of us use 100% of our ankle motion in a deep squat.  If you have 50% less ankle motion than you were born with due to multiple sprains or stiffened those ankles from incorrect running technique, then you’re not even going to use that much. 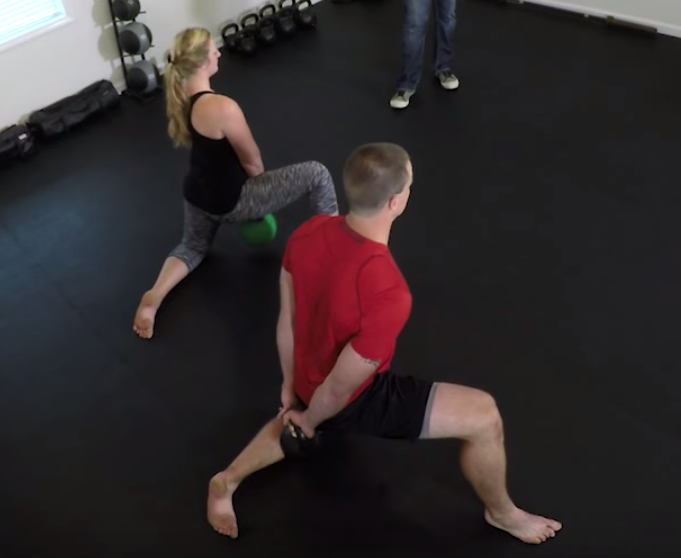 We never work near the end of our range. We always leave that buffer zone but if you’ve lost a significant portion of your ankle mobility, then that buffer zone still gets added. Even without any ankle discomfort, you will start protecting stiff ankles as if they’re normal joints and you will start sacrificing other joints to do so.  Two major joints that just get hammered with ankle problems: the knees by going into valgus, and the lumbar spine by going into flexion.

If you’ve ever looked at the joint-by-joint approach that Mike Boyle and I had an original conversation about (he’s published on it and I put some stuff in the appendix of Movement) You will realize that the knee and the lumbar spine, because of the mobility, are obligated to give up some of their stability to cover movement efficiency when the ankle or hip is stiff.

So, handle it.  Do some foam rolling on that calf on the anterior tibia.  Get the ankle stretched out and the foot supple.  There’s no substitute for stretching but stretching doesn’t work if you don’t put anything behind it.  You must hit ‘save’ on the document and this is exactly how you do it.

Tall-kneeling hits ‘save’ on the document of thoracic spine mobility and hip extension.  Half kneeling hits ‘save’ on the document of the 3-D hip and the ankle.  Both add integrity to the lumbar spine.  Half kneeling adds integrity to the knee by keeping that knee tracking over the foot and training that in your warm-up so that you don’t have to think about it when you’re doing lunges or split-stance work.

Gray Cook and Brett Jones review significant issues that are the leading cause of hip and knee dysfunctions. Discover how a systematic approach can address major contributing factors by screening mobility/stability and applying corrective strategies that will lead you to return to effective exercise progressions.

FMS Certified Members get this for FREE