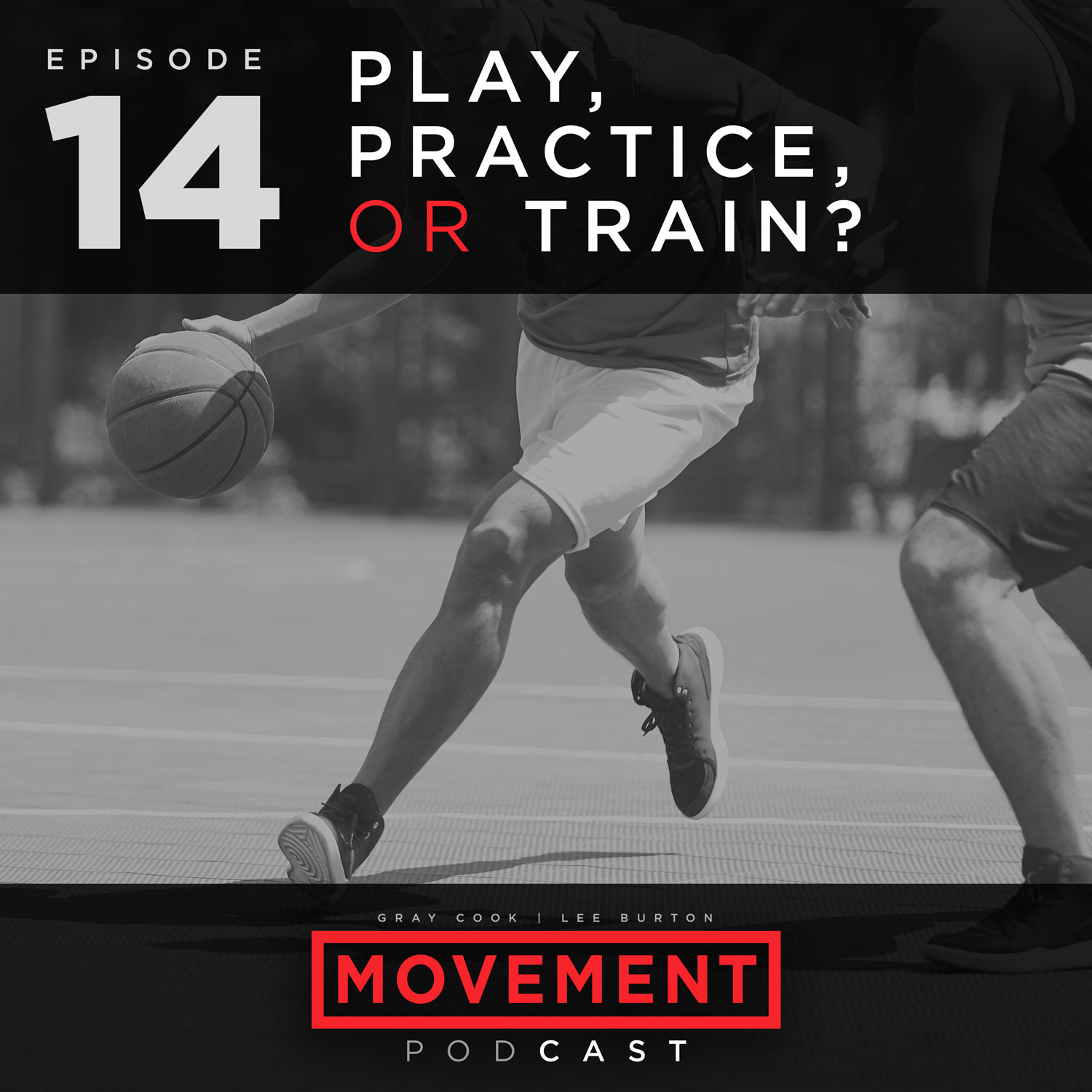 Let’s take three terms—let’s think about the words play, practice and training, and see what they mean to us.

Play is something we mostly associate with either playing a sport, or children doing random activities on a playground in any environment—randomly running around doing stuff, climbing, spinning or anything they want.

Then we have the play connotation in sports, everywhere from a pickup basketball game to weekend golf to professional sports.

The idea of practice is pretty easy. We usually practice things that require something more than natural ability, meaning that it requires a skill and we have to practice that skill.

Now let’s think about the way we look at play and the way we look at practice, and just realize neither of those really have a lot of the same guidelines as what we conventionally call training. We’re not really talking sets and reps in play or practice. Basically, we play until we get bored with a certain activity, and then we go pick another activity.

Play is emotionally driven and very random. Yet there’s full engagement—quite a bit more engagement in play than there is in a person’s gym workout.

Let me expand that. When children are on the monkey bars in a playground or on a balance beam, they’re randomly playing. They’re not trying to be a world-class gymnast. They’re totally engaged in that balancing activity, far more engaged than somebody who considers training something done at the gym plugged into a headset while drudging through a treadmill jog. 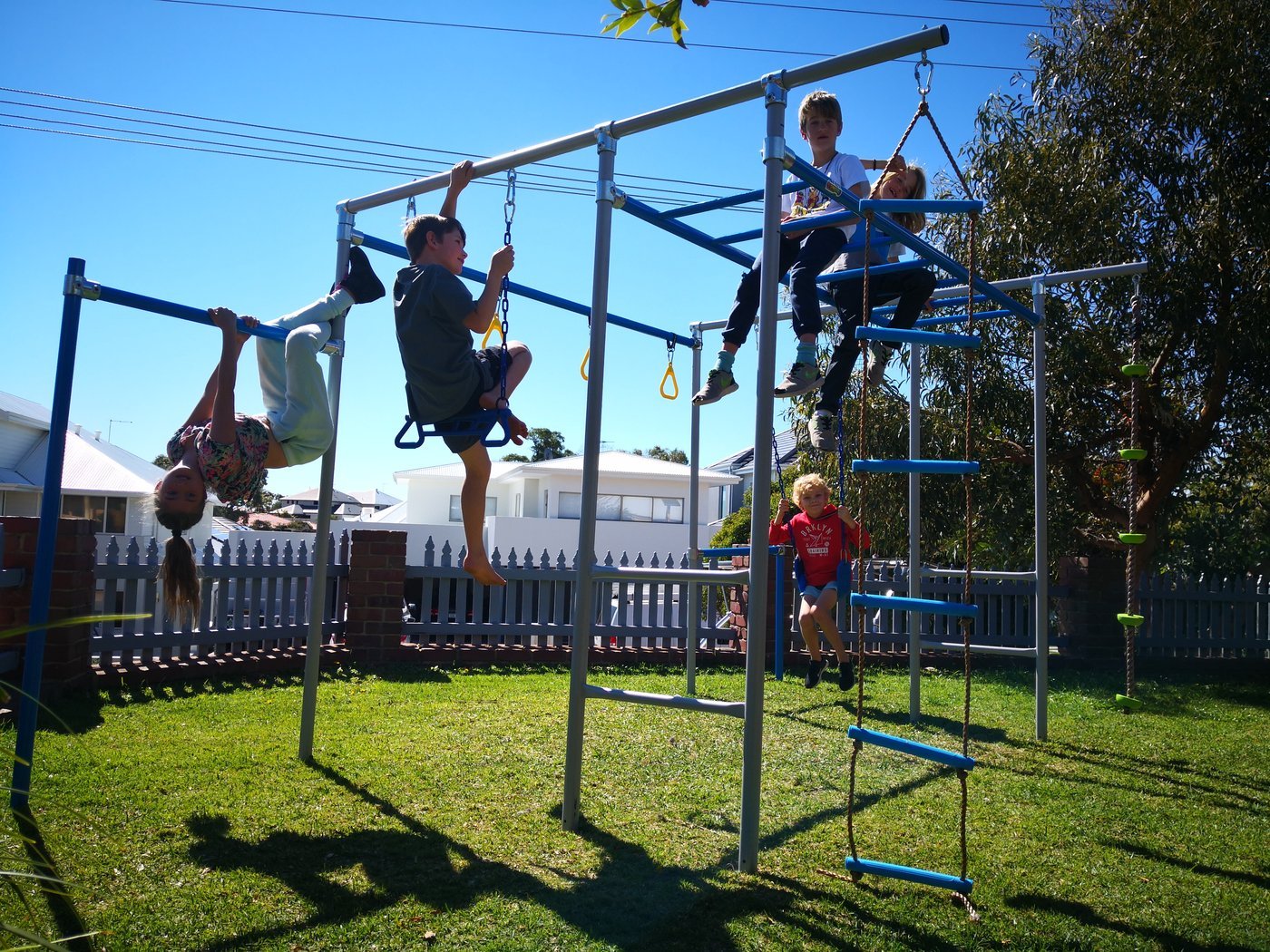 The engagement part of play is absolutely amazing. That mind-body experience is part of the neurodevelopmental system as we grow and learn to use our bodies in differing environments. Play is what we’re engineered to do until we find activities we love so much that we want to practice them. Once we’ve practiced them, we want to elevate our status and have organized training for them. Play is where it all starts.

Practice, on the other hand, is one of those things where we do have to again be engaged. We learn from the best of the best that it’s not so much the talent for the activity, as it is the talent for the way they practice the activity. Look up the term ‘deliberate practice.’ It’s practice with the right kind of feedback, the right kind of time and attention to detail.

Play and practice are two things we need to bring to our training. As a matter of fact, I reserve training for the organized approach to elevating someone’s physical capacity.

But if we don’t set baselines, there’s no organized approach.

For baselines, we engineered the Functional Movement Screen and the Y Balance Test. We use performance tests. We use one-rep max. We use three-rep max. We use sprint speed tests, agility and endurance tests. We have all kinds of tests, but how many people are grabbing their bags right now and heading off to the gym to train? Really? What are you training? Are you working against a baseline?

Nobody ever says, ‘I’m going to the gym to practice or play,’ but I think there are a lot of people who show up at the gym every day and just pretty much…play. They get engaged in an activity. They see somebody doing something new and decide they’re going to go play with that for a while. The side effect is a workout, but they’re actually just playing.

We see a lot of workouts posted on the internet, but we don’t know if there’s a training effect because they didn’t post any baselines. They didn’t tell us what their goals are. It’s just random activity or there is a number. “I did this many. How many can you do?”

That’s probably not the best application of science.

On any given day, you may head to the gym, a training facility or outdoors, but you have to ask yourself: Are you playing? Are you practicing? Are you training?

As Ed Thomas told us when we were developing the Club Swinging DVD, [see also: Introduction to Indian Clubs Online Course] people used to go to the gym to practice a skill, and the workout was the side effect. That’s what we see when kids truly enjoy playing an activity. The conditioning is a side effect, whereas in training conditioning is the focus.

What if we engineered a workout one day a week where we went to practice a lift or a Turkish getup? It’s not about how much or how many we do. It’s literal perfection— working with somebody who knows what they’re doing or getting with a partner and videoing each other, looking back at the video, watching an expert on video and practicing the activity.

It’s not just doing the activity, but practicing it. The precision and the technical aspect, all of that is going to get better. There’s going to be a workout as a side effect, but the whole point is to get better at something.

The other way to do it is to create a scalable situation, a self-limiting situation. Erwan and I did a bunch of that in our Exploring Functional Movement project. That’s an area where I think Erwan is a genius. It may look like a lot of what Erwan does at MovNat is just adult play in nature, but it’s not. Erwan has that ability, like a lot of other coaches I know, to instantly size up the group and then turn an activity into a completely scalable situation so everyone involved gets what they need.

I’ll be talking more about this in the future, but for now, just think about it. Maybe we could use a play day as our recovery day. Maybe we ought to give up one of our training days and have a practice day for those activities where we’re not as proficient or where we wish we could do better.

It was such a disappointment to see kettlebells make it into someone’s training program before making it into that person’s practice program. That person is missing the precision, attention to detail, alignment and technical proficiency—all of those things were what the RKC was about.

The snatch test was just to see if you’d actually done some practice and to see if you were efficient with the movement. One or two look really good, but when you’re in 30 deep, form starts to break down. What do you do? Do you lean back on your guts? Do you bite your lip and gut through it? Or do you lean back on your efficiency thinking, ‘Okay, pick it up. Stay aligned. Stay technical’?

Here’s my challenge - do what I’m going to do. I’m going to have a day where I play. It is going to be a workout. It might even look like I’m practicing some skills, but I’ll randomly move from one activity to another and just enjoy myself.

In play, standup paddle boarding is constantly challenging and totally engaging. Yes, I’m playing, but I won’t be racing anytime soon. My racing days with a paddle are behind me, but I love the paddle board.

In practicing, I am working on my deadlift. In the Key Functional Exercises DVD I gave a lot of pointers for deadlifting, that doesn’t mean I’m a perfect deadlifter. I have some goals for deadlifting, but the first one is to dial in my form.

Then in training, pick either some movement patterns you need to correct or some physical capacity goals you’d like to elevate. Set a training day or a couple of training days a week to really push those margins. Try to become better in a movement pattern with quality, or try to become more proficient in a lift, speed work or endurance work.

Think about it. Play, practice and train. You should be able to define each of those with respect and integrity for both the people you train and for yourself.