NBA Pre-Draft Assessments and the FMS 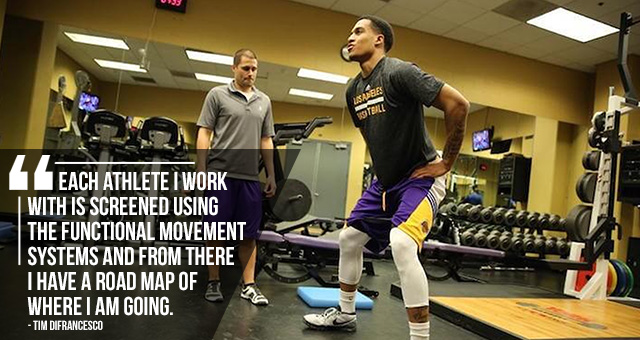 For the third straight year, the LA Lakers are picking in the top 10 of the NBA Draft.  We spoke with Tim DiFrancesco, an FMS Certified strength and conditioning coach for the Lakers, about how they use the FMS in their pre-Draft process (Tim's quotes are in italics).

From early May until the week of the draft, the Lakers will evaluate almost 100 players in workouts and assessments.  Difrancesco will perform the FMS on every prospect who walks through the doors of the Lakers practice facility.

"The FMS helps me to have a better idea of someone’s movement literacy.  I know how far back in the process I might have to go to reset."

Similar to other popular NBA Combine measurables like standing reach or vertical jump, the FMS provides another data point for teams to be able to evaluate the readiness and durability of prospects.

"It's valuable to know how the screen results match up with clinical findings.  It can tell us so much about an athlete."

For most top prospects, basketball seasons go deep into March.  Immediately following the season, they dive into preparations for the NBA Draft.  This includes traveling the country for individual workouts, team workouts, Combine prep, and more.  Once a player gets is drafted they're immediately flown to a new city to commence training.

"My piece in that process is to peel back layers of movement quality or identify individual limitations.  I’m trying to use the screen to load the athletes responsibly."

The NBA's Summer League runs from July 8th - 18th and most team's training camp begin in late-July.  That leaves an extremely small window for a strength and conditioning professional to assess the athlete and prepare them for the upcoming NBA season.

"The only way that you’re going to effect change on musculoskeletal structures is to get to a point where you can move heavy load.  The FMS helps me see what I need to do to get there faster.  If I can’t get to a point to where an athlete is lifting heavy stuff then I can’t have the same effect."

"If you’re waiting to September to address issues or limitations in the athlete, you probably won't be ready for the start of the season on October 1st."

Like many teams, the Lakers staff meets on a regular basis to

"In terms of making athletes more durable I’m really focused on how we provide the right stimulus to promote recovery, growth and strength within support structure of musculoskeletal system.  It wasn’t many years ago that people thought that lifting weights could ruin their shot.  It's only recently that we have wholeheartedly accepted that S&C is critical for hoops.  There are a number of ways to get it done, but at the end of the day, if the player is getting the work to build a durable body, the boxes are being checked."

The grind of the NBA season is unlike any other sport.  The variable schedule and playing time makes it nearly impossible to follow a scripted program.

"Training in the NBA requires someone who isn’t tied to a pre-programmed routine. You have to be ok with it being a fluid process."

"In a vacuum it seems like training is all a pro athlete does, but in reality, an S&C coach in the NBA has to choose wisely about when to load their athlete."

Through our work with the NFL and NHL Combines, we've encouraged organizations to analyze FMS scores within the context of other athletes in the sport.  It makes sense to do in basketball, as well.  For example, it's not uncommon for especially tall basketball players to struggle with the ASLR.  Oftentimes, the issue isn't hip mobility or hamstring flexibility, but a limitation in core control.  While a poor score certainly represents an opportunity for improvement, the ASLR is a particularly difficult move for a 6'11" athlete with such a long levers.  When testing large populations of elite athletes, it's important to be especially sensitive to results that are inconsistent with their peers.  When you find something that is obviously not like the others, more investigation is needed.

Overall, organizations should never base their draft decision on an FMS score, but it's an efficient way to identify potential limitations in prospects.  The FMS score won't predict who will be the most productive basketball player, but can provide insight into an athlete's movement quality and readiness to train (which, ultimately, can effect their on-court performance).  Thanks to Tim for providing some insight into how the Lakers evaluate players.  Best of luck in the upcoming season!

RELATED ARTICLE: LEARN HOW THE FMS IS USED AMONG TOP BASKETBALL ORGANIZATIONS