Director of Marketing and Communications, Stephanie Ferrugia, is 42 years old and has been active until the last couple of years. Stephanie's goals are to be more aware of her movement quality and keep herself in top condition as she ages. Stephanie is not in rehab and is not experiencing pain, therefore, the Screen is her starting point. Follow Stephanie’s movement journey here as we kick off with the Functional Movement Screen (also known as the FMS or the Screen).

First up: the Functional Movement Screen

Stephanie cleared six of the seven patterns with 2’s and 3’s (scores displayed in the app report). However, the problem was her push-up, where she scored a 1. While it is fairly common for females to have a lower score on the push-up, this is something we need to work on, nonetheless.  Intervention is necessary before we put Stephanie's core and upper body stability under any workload. Remember, the goal of the FMS is no pain, no 1's and no major asymmetries. We also noticed that Stephanie has a slight asymmetry in the rotary stability test even though she scored a 2 on both sides. We will bear that in mind as well in her training and correctives, but it probably is related to the core stability issue that showed up in her push-up. FMS certified pros have an opportunity here to play to Stephanie's strengths by training the areas where she displayed competency and work on her weakness -- the push-up.

We also went ahead and checked Stephanie's breathing function, which we anticipated would be good (and it was). The Breathing Screen takes about five minutes and provides another layer of information that is extremely helpful for professionals in their initial consultation with a client, patient or athlete.  We know that breathing affects movement quality and when breathing is the primary issue and is corrected, movement improves.  Therefore, we want to correct breathing dysfunction first and then recheck movement quality. Since this was Stephanie's initial consultation, we conducted all the applicable entry level screens to collect comprehensive information about her. 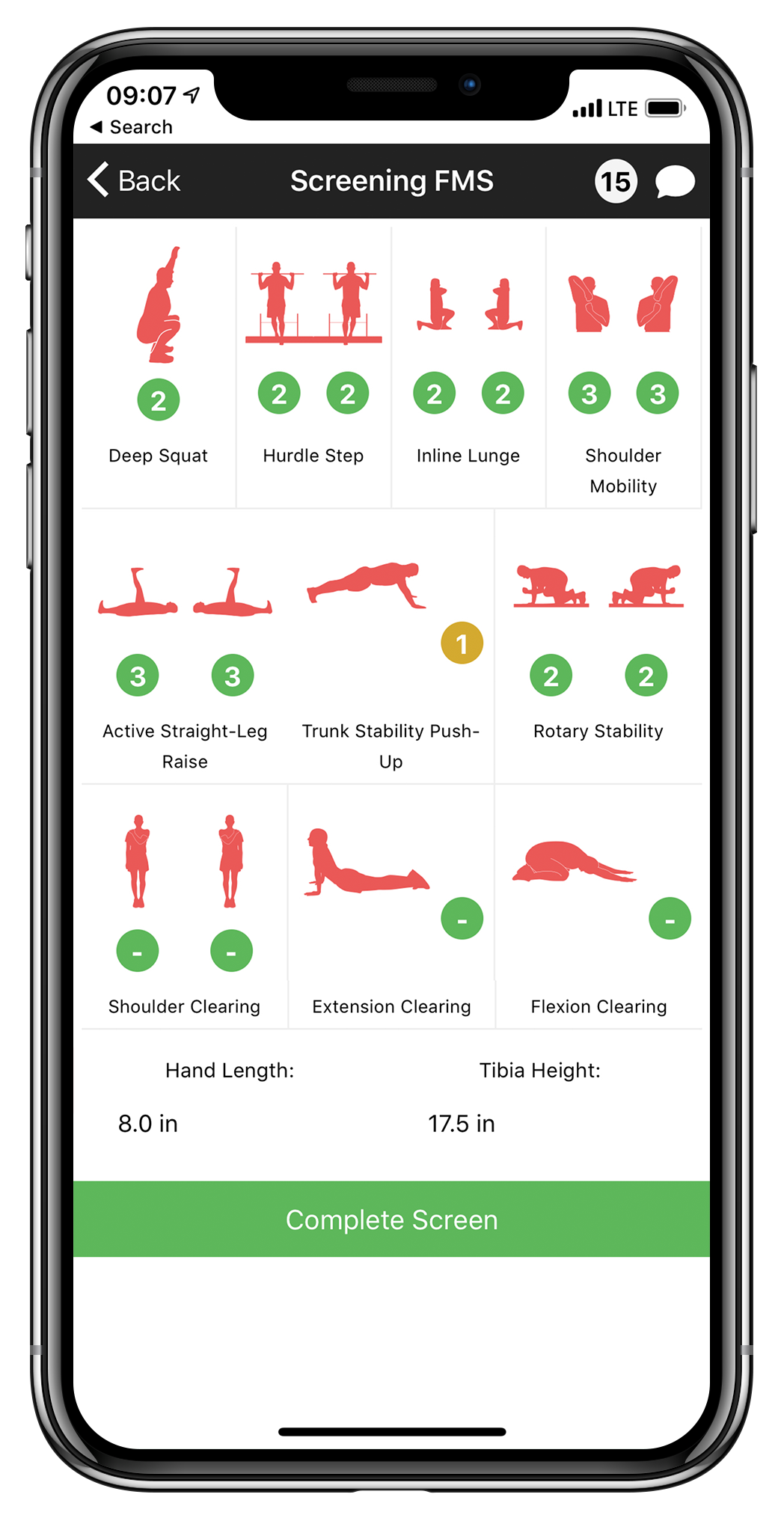 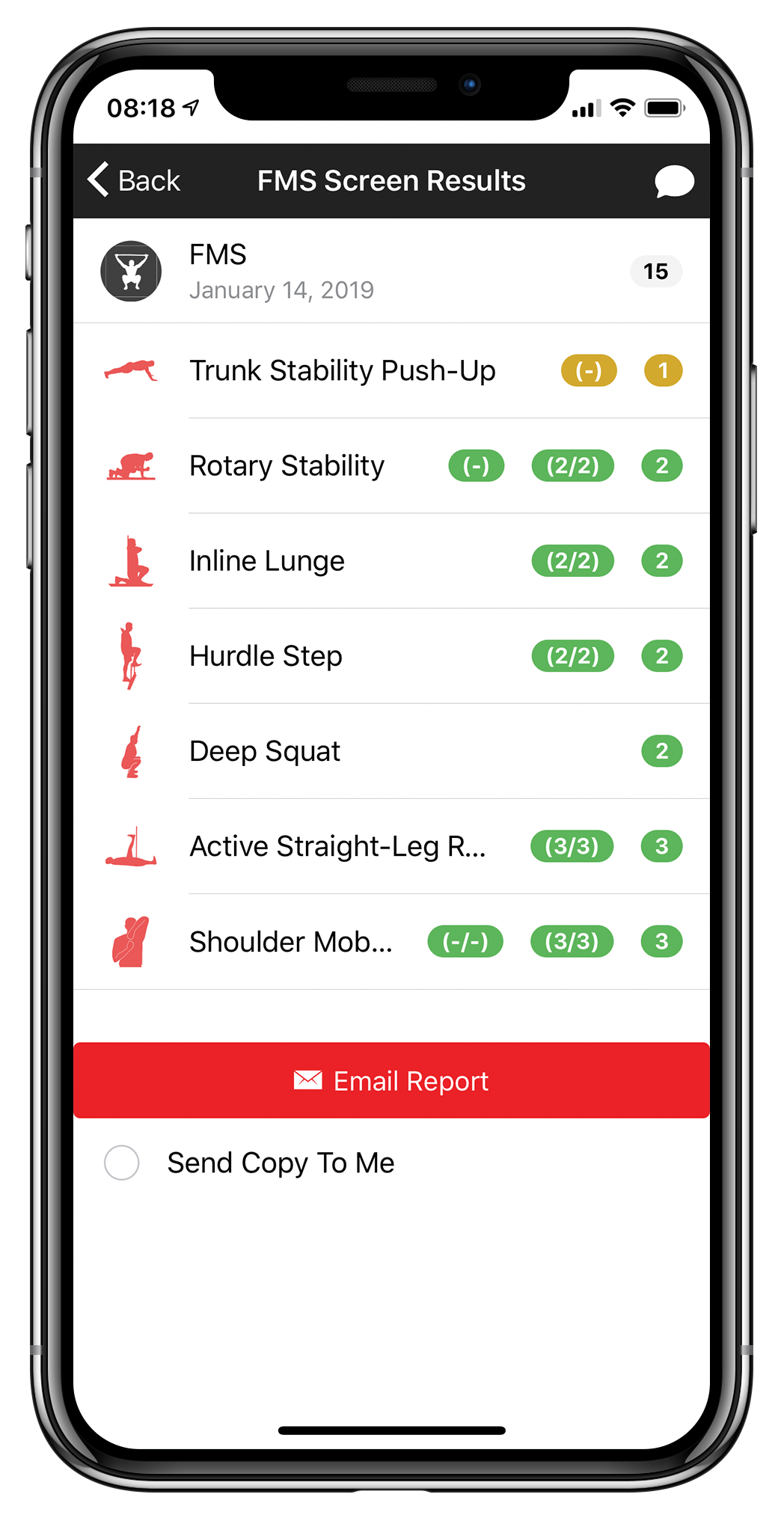 The first focus is to improve core and upper body stability with some correctives. The Push-Up Walkout is an exercise that requires no equipment and can be performed just about anywhere. Stephanie should practice 4-5 reps of the shoulder tap walk out push up everyday. We are also prescribing some cardio work.  Stephanie is a jogger, but colder temps aggravate her asthma, so she prefers an indoor activity during winter. Because of this, she explained that she usually drops cardio work altogether during the winter months.  To keep Stephanie actively engaged in a cardio activity, we are recommending jump rope intervals in between her correctives.

It is important for Stephanie to establish muscle memory with proper form for a push-up.  Because she is unable to perform this exercise, using a Cook band to help her get over the hump and off the ground without collapsing her core is appropriate.

We are also prescribing a half kneeling turn with kettlebells to help Stephanie fire her core.  Both the assisted push-up and half kneeling turn should be performed for 3 rounds at 4-5 reps each (each side for the half kneel).
Stephanie will perform these correctives and her cardio 4-5 times per week until her next check-in.
<== Video for ma1JFxJn ==>

This week, we're continuing to focus on stability and motor control in Stephanie's lower core/body.  While her upper body strength is likely a contributor to her 1 on the push-up, we're more concerned at this point with her core.  Enter, the halo.  This gives Stephanie some upper body engagement, but keeps her core as the central player.

In addition to alternating direction halos, Stephanie will also perform one arm forward presses with a Cook band.   The half kneeling forward press sets Stephanie up in an anti-rotation position for better reflex and stabilization, which are both essential to strengthening the core.  As she improves, we will challenge Stephanie more by having her use both arms and/or adding a band to cave in her knee so she has to fire her core more.

As you can see, we are able to meet Stephanie's needs with minimal equipment in a kettlebell and Cook bands.  The magic happens in the programming and FMS certified professionals can tackle common issues like Stephanie's with confidence.

Stephanie is a common case of a typical FMS client.  Her limitation in core stability and overall strength continue to show up in her push-up.  Stephanie's mobility is good and her Week 4 rescreen indicated improvement in her squat.  That push-up remains her weakness and that's not surprising since she is a jogger who has not spent much time on strength training.

Stephanie will continue her correctives and training, but her goal to improve her core stability and complete a push-up with competency remains the focus.  Interestingly, other members of the FMS staff have similar movement dysfunctions and FMS scores.   Get Stephanie's take to learn about a group has organically grown FMS HQ who are working to tackle their movement health issues. 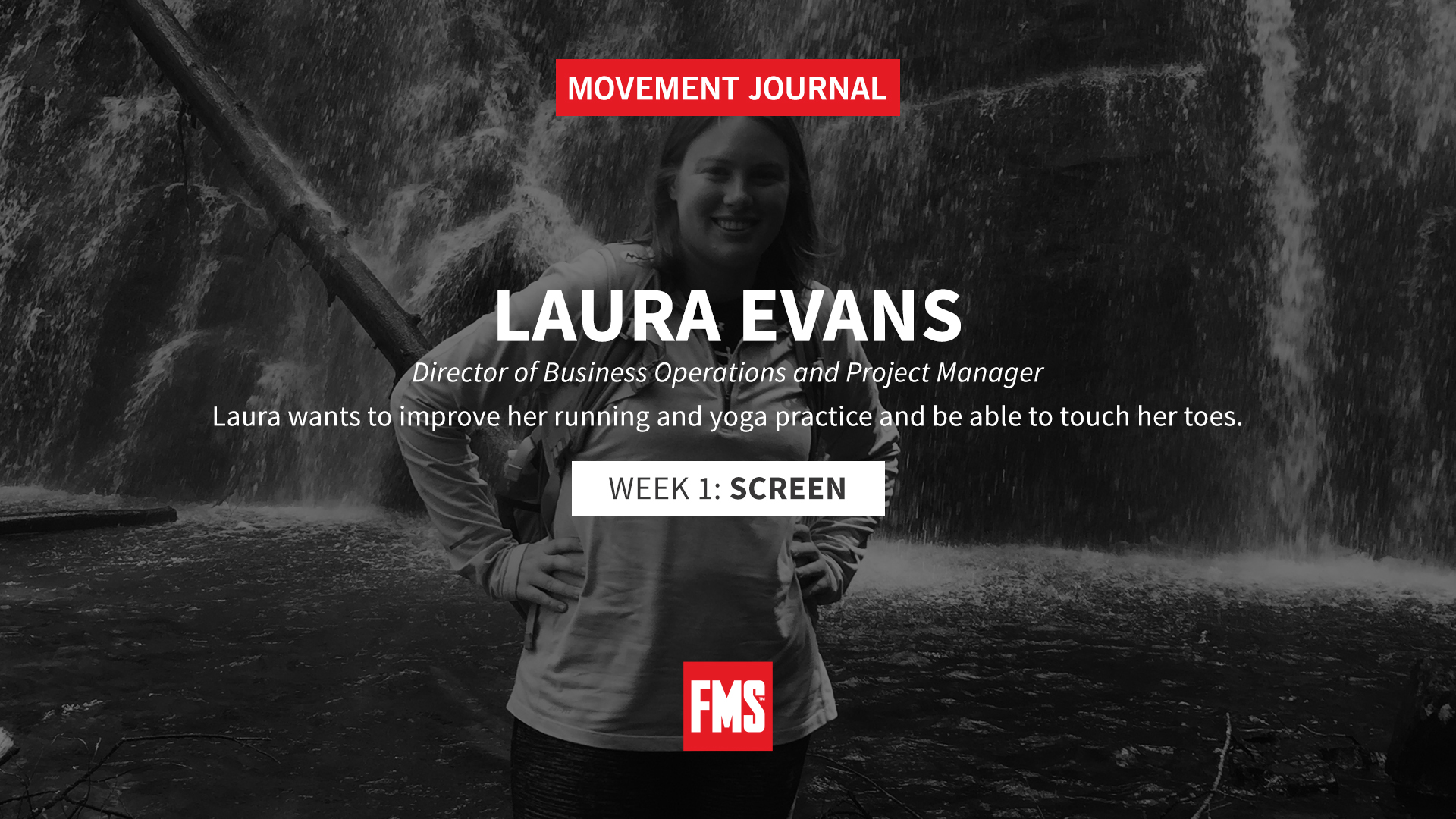 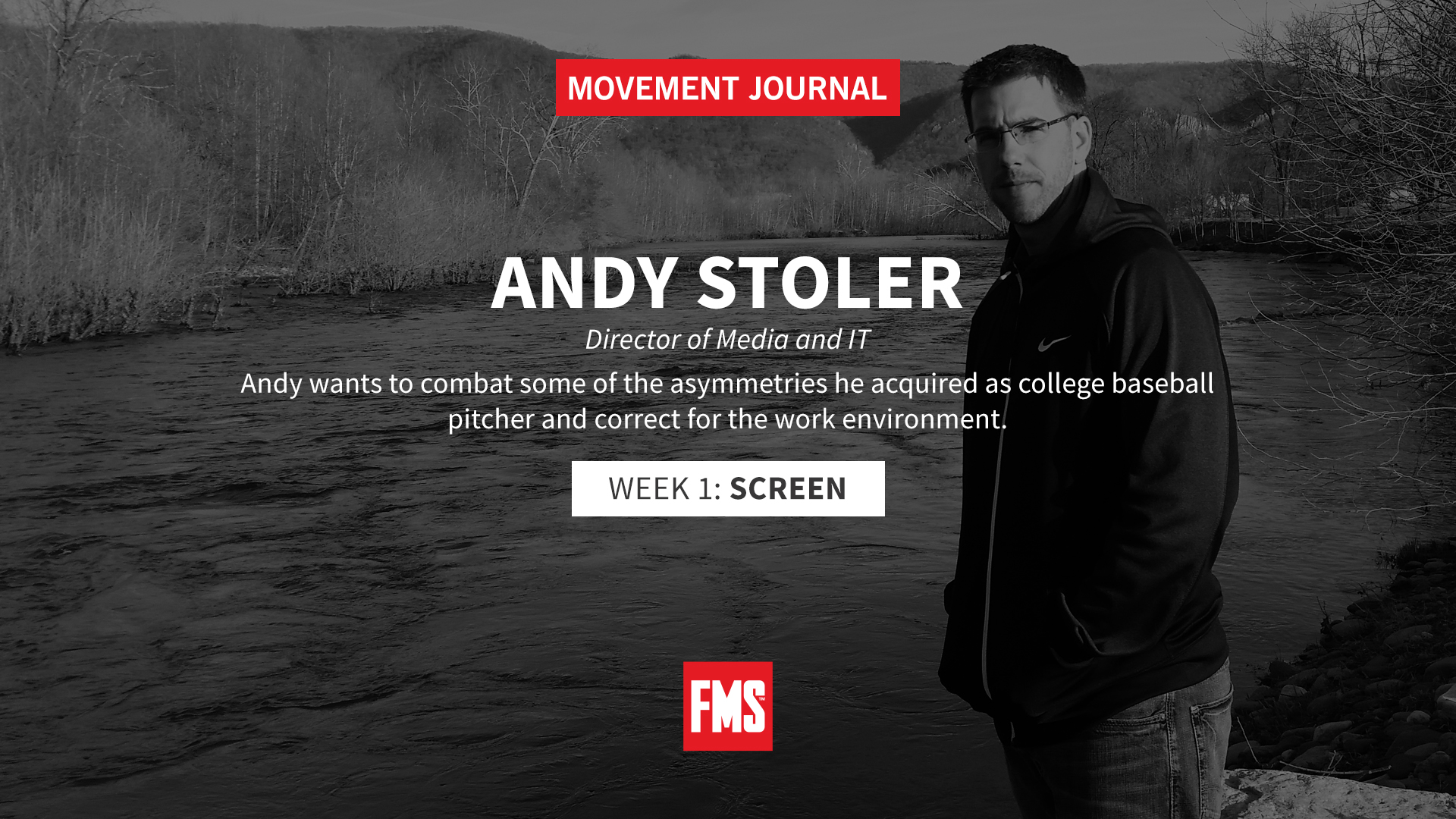 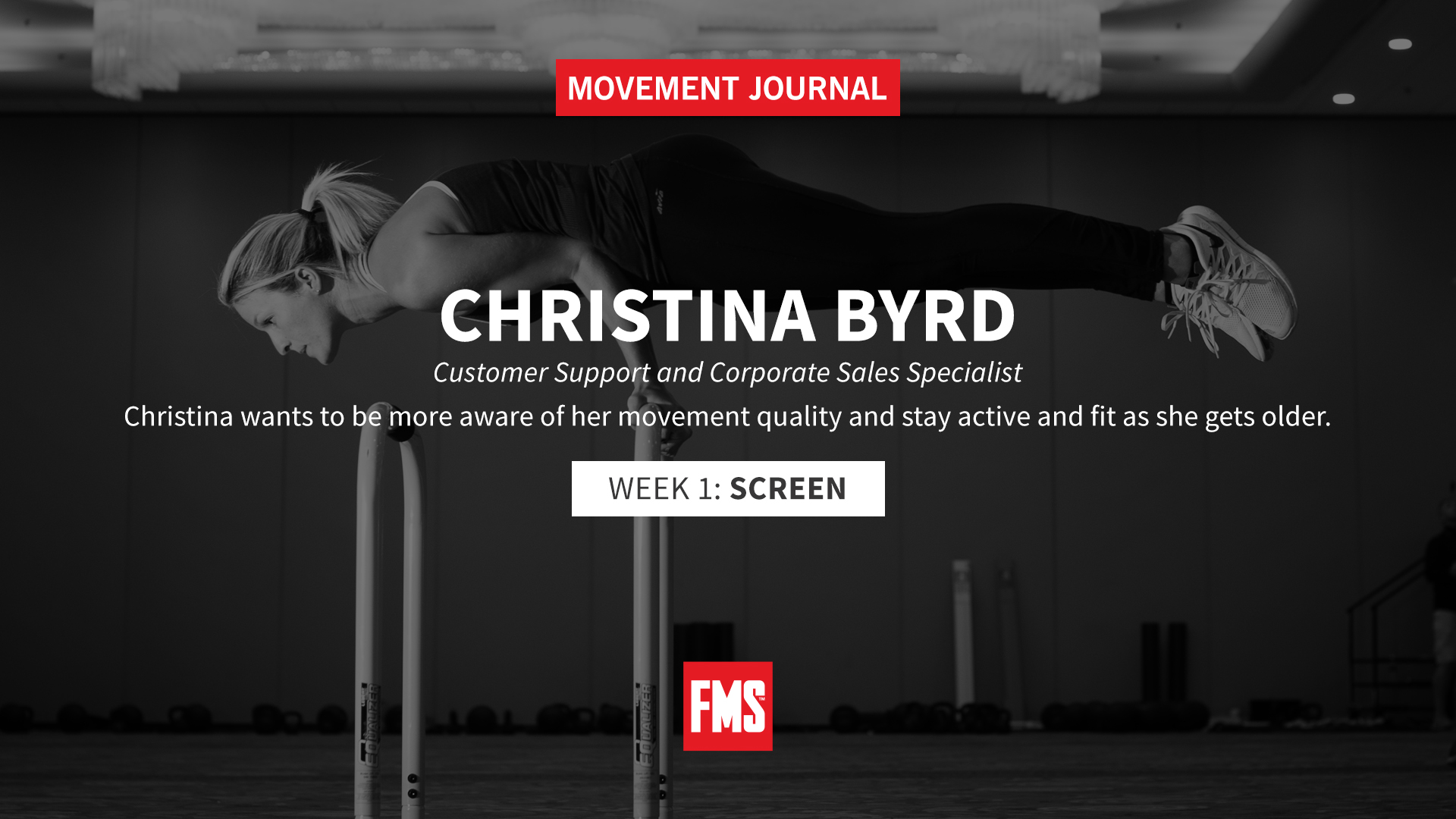 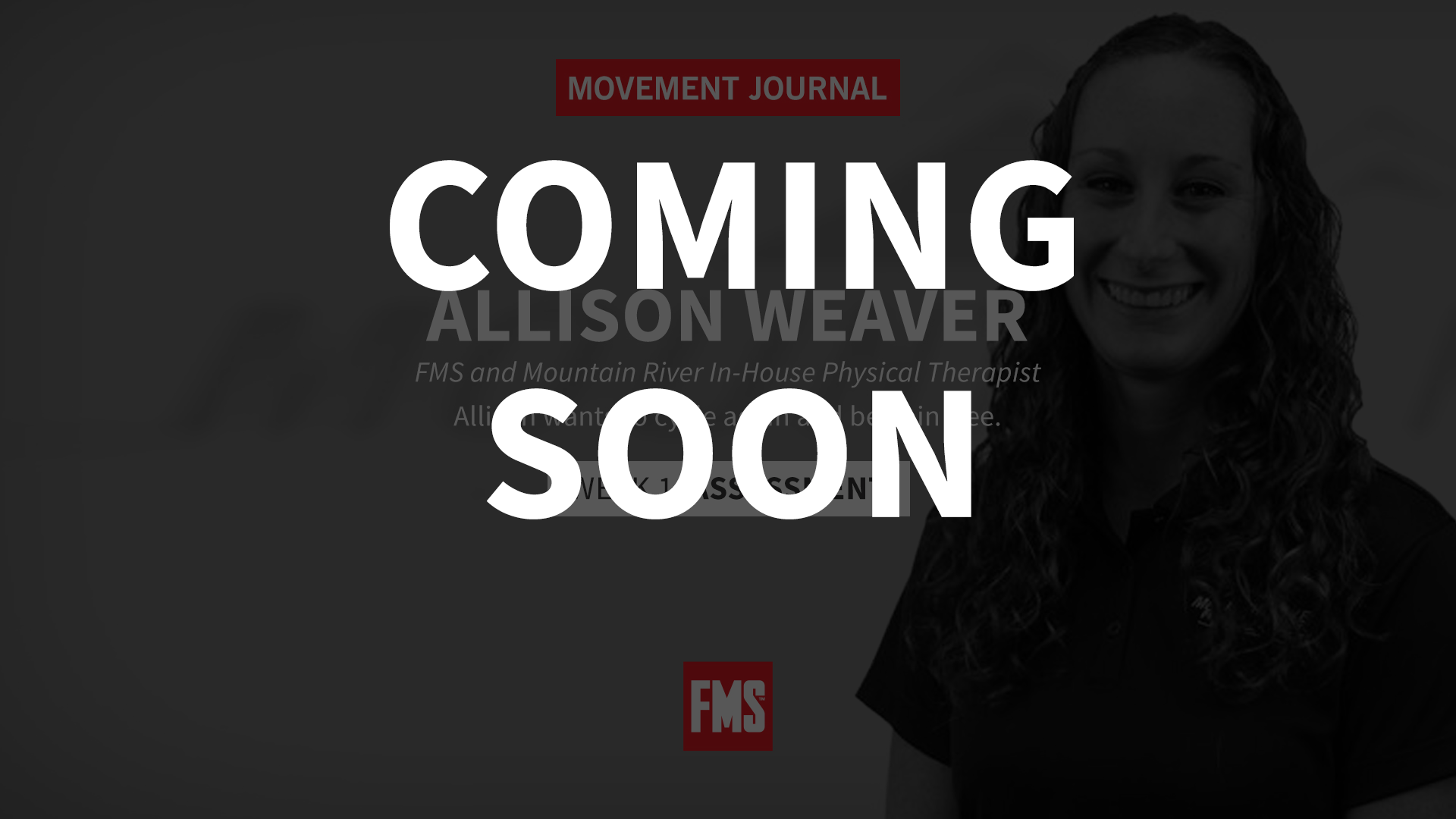